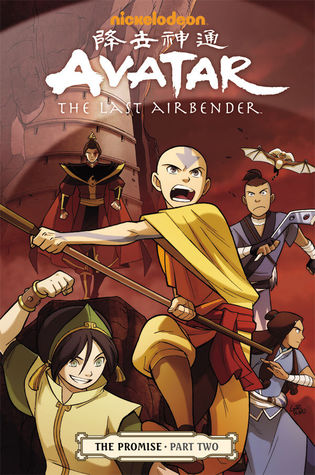 Aang and Katara work tirelessly to prevent a dispute between Fire Lord Zuko and Earth King Kuei that could plunge the world back into war! Meanwhile, Sokka helps Toph prepare her hapless first class of metalbending students to defend their school against a rival class of firebenders!

The Gaang is back in this second installment to a trilogy of graphic novels. The art and characters are as beautiful and captivating as ever! It’s wonderful to see how Aang and his crew are doing after the conclusion of the television series. If you’re a fan of Avatar: The Last Airbender, you should get your hands on this second installment of The Promise. If you’ve yet to see the TV show, you’re missing out on so much fun, adventure, and excitement!

What I really liked about this book was getting to know how Aang will deal with conflicts in the future, as he really comes into his own as the Avatar. He’s supposed to be the peacekeeper, yet that’s kind of an impossible task when two sides of the conflict assure him that it would end if he’d do completely different things. While Aang is still young in this book, he’s wiser and usually has Katara around to either guide him or help him find a safe space for him to think. Then he’ll be able to make decisions that will be best for all involved.

I also really liked seeing Zuko interact with his father. It’s only a small part of this book but I could sense so much emotion and tension boiling down to those moments when he speaks to Ozai in his cell. Zuko is a great character; I love that he’s flawed and is still trying to find a way to the light, though he isn’t entirely ready or equipped to abandon his family yet.

I’m excited for the last book in this trilogy and am looking forward to picking up more of these graphic novels. It’s exciting to see the characters again and they’re so well done. I love how they fit in so well with the show and capture the characters wonderfully!

Have you read these books? Do you want to read them? Let me know what you think in the comments!