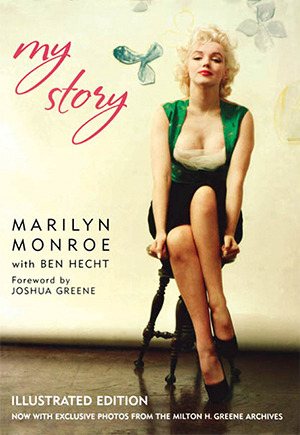 Written at the height of her fame but not published until over a decade after her death, this autobiography of actress and sex symbol Marilyn Monroe (1926-1962) poignantly recounts her childhood as an unwanted orphan, her early adolescence, her rise in the film industry from bit player to celebrity, and her marriage to Joe DiMaggio. In this intimate account of a very public life, she tells of her first (non-consensual) sexual experience, her romance with the Yankee Clipper, and her prescient vision of herself as “the kind of girl they found dead in the hall bedroom with an empty bottle of sleeping pills in her hand.” The Marilyn in these pages is a revelation: a gifted, intelligent, vulnerable woman who was far more complex than the unwitting sex siren she portrayed on screen. Lavishly illustrated with photos of Marilyn, this special book celebrates the life and career of an American icon—-from the unique perspective of the icon herself.

I had to read this book for class. I had problems with it even before I learned that there’s been controversy over how much of this Marilyn possibly wrote and how much has been written by other authors, like Ben Hecht. There’s no way of knowing how much of this ‘autobiography’ is Monroe’s original words and how much is a persona that’s been built for her by outsiders.

A lot of the story seems to pit Monroe against other ladies and much of the writing is simplistic. Perhaps this is made to make it seem more believable that it is Monroe or it simply shows that she wasn’t very great at writing. Because the book ends, very abruptly, at the supposed finish of the manuscript that she handed in. Even though this is a snapshot of her life, while she was still alive, you would think that there would be a little more thought in coming up with some kind of conclusion or a less jarring transition at the end.

My edition, the most recent one, also included color photos of Monroe. In class we discussed the impact these photos might have on the text. Most of the images have Monroe with a blank stare, posing suggestively . . but the text itself hints that she may not have had any control over what photographs were used to promote herself and her films. It’s interesting to think that this image we have of Monroe may not be anything like her true self at all.

I don’t really understand the continued fascination with Marilyn Monroe but if you’re one of those people who has a poster or shirt of her and don’t really know anything about her, I think you should give this book a read. That way you can know a little more about her life as well as the work she put into making her career and image. It’s a quick book but not one that I’d recommend to most people.