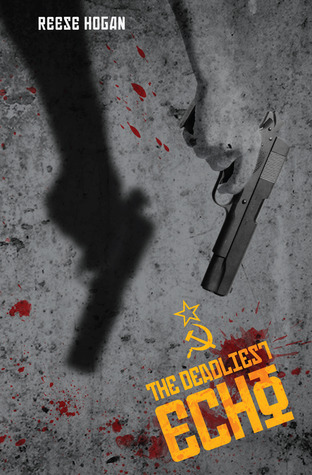 The year is 1928, and American mercenary Echo Maebius is seized while fleeing Russia after the disappearance of Joseph Stalin. Just when things can’t get any worse, Echo’s doppelganger walks into the room, offering him a way out—but with a terrible catch. Now, broken, damaged, and alone, Echo must find out why his closest comrade Jez has disappeared from his life—and why the failure of their mission in Moscow is responsible.

Told in alternating chapters between Echo’s past and present, The Deadliest Echo is a science fiction thriller about assassination, alternate paths, and the dangers of being a foreigner in a country newly raised from revolution. It is a powerful tale about the thin line between loneliness and friendship, and the intricate web of secrets that forces Echo to confront the one truth he most wants to escape…

Unless he can finish the mission he never completed in Moscow, the whole world will pay the price for his failure.

I’ve been trying to get into reading more books involving history lately so when I had the chance to read The Deadliest Echo I jumped on it. It’s an interesting combination of historical fiction with a dash of sci-fi, a whole lot of action, and complex characters.

Echo was most interesting to me because at first I’d assumed he’d be . . . not exactly boring, but there’s a certain stereotype that comes with mercenary characters. But Echo is younger than expected and although he is certainly clever and calculating, he’s also lonely. Wiling to do a lot to keep others from realizing this, of course, but when he finally gets himself a friend he’s willing to lose everything to keep that friend safe. And that’s something that I can understand, that makes him human.

Action is all over this book, literally from page one. Told with each chapter giving a piece of Echo’s timeline, before and after a major event happens for him, there’s something intense happening in each portion of his life that’ll have you wanted to learn about the past when you’re reading the future and wanting the future when you have the past. This book was so intense that, yes, one night after finishing a chapter, I actually dreamed that Russian assassins were coming after me. If that doesn’t say something about how entranced and entrenched you’ll be in The Deadliest Echo then I don’t know what would.

I feel like this is a novel that can appeal to people who read a plethora of different genres, especially if you’re wanting to get a peek into a different genre to see if you’d enjoy reading it as well. Sci-fi, historical, action, thriller, and even fans of spy novels will all find something unique, captivating, and thought-provoking in The Deadliest Echo.

One thought on “The Deadliest Echo by Reese Hogan”