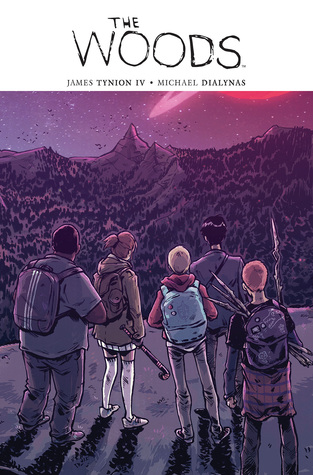 The Woods, Vol 1: The Arrow

WHY WE LOVE IT: As fans of James Tynion IV’s work in the Batman universe (BATMAN ETERNAL, RED HOOD AND THE OUTLAWS), we were eager to publish his first original comic series. THE WOODS gives us that same eerie, smalltown horror feel we get whenever we read a Stephen King novel.

WHY YOU’LL LOVE IT: James Tynion IV is a former protege of BATMAN writer Scott Snyder, so you know he’s learned a lot about how to craft a compelling tale. If you’re fan of teen conspiracy comics like Morning Glories, Sheltered, and Revival, you’ll immediately be sucked into THE WOODS.

WHAT IT’S ABOUT: On October 16, 2013, 437 students, 52 teachers, and 24 additional staff from Bay Point Preparatory High School in suburban Milwaukee, WI vanished without a trace. Countless light years away, far outside the bounds of the charted universe, 513 people find themselves in the middle of an ancient, primordial wilderness. Where are they? Why are they there? The answers will prove stranger than anyone could possibly imagine.

Collects issues 1 to 4 of the critically acclaimed series.

I picked up this volume on a whim when I was browsing the graphic novel section of my library. The concept seemed interesting and I liked the way that the artwork is done, so I decided to give it a shot. While this wasn’t my favorite, there was definitely enough intrigue here to get my interest.

This at first reminded me of the Quarantine books, because it’s an isolated high school and kind of shows how teens will begin to build their own society (or crumble under the pressure) when they’re removed from everything they know and find familiar and are faced with a deadly situation. Except in this case, we also have the faculty and principal struggling to decide what to do with the student body now that the entire high school has somehow been transported to an alien moon. As can be expected, nothing is going to go smoothly. Especially when the moon’s inhabitants are lethal.

While I liked the slow build to these issues, where a little more information is teased out in each chapter, there was never quite enough. I was still looking for the original thing that was going to happen here, what would make this series really stand out. I think that I’m still looking for it, even among all the high school drama and nightmarish creatures. Maybe a lot of it is the unnecessary gore? The shock factor wasn’t enough to really impress me.

I do like that there seems to be some kind of underlying conspiracy here that we’ll find out more about, eventually. I know that there are at least four more volumes to come after this, so I hope that the anticipation isn’t built up too much and that the revelations start coming. I’m intrigued enough to immediately reserve volume two, mostly because I’m hoping for more. Particularly because some of the main characters are being mysteriously vague and frustrating. And when the character who’s an asshole starts to seem to know more than anyone else, that’s when I have to begin to worry.

Overall, I liked this volume. It was a super quick read. But it wasn’t anything to rave over, and I’m hoping the next volumes really pick up the spooky conspiracy/alien atmosphere introduced here!