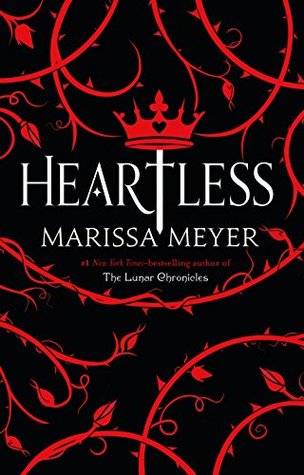 Long before she was the terror of Wonderland — the infamous Queen of Hearts — she was just a girl who wanted to fall in love.

Catherine may be one of the most desired girls in Wonderland, and a favorite of the yet-unmarried King of Hearts, but her interests lie elsewhere. A talented baker, all she wants is to open a shop with her best friend and supply the Kingdom of Hearts with delectable pastries and confections. But according to her mother, such a goal is unthinkable for the young woman who could be the next Queen.

At a royal ball where Cath is expected to receive the king’s marriage proposal, she meets Jest, the handsome and mysterious court joker. For the first time, she feels the pull of true attraction. At the risk of offending the King and infuriating her parents, she and Jest enter into an intense, secret courtship.

Cath is determined to define her own destiny and fall in love on her terms. But in a land thriving with magic, madness, and monsters, fate has other plans.

Where do I begin, with an author like Marissa Meyer? She writes retold fairy tales. Those are the kind of books and stories I love most in the world, because all at once they’re familiar and excitingly new. She does it so well, so creatively, that I look up to her both as a reader and a writer. I’ve had the pleasure of meeting her, once, when she went on tour for her recent book of short stories that tied into her Lunar Chronicles collection.

But Heartless, that was a new experience. It’s the first book I’ve read by her (and the only that exists so far as I know) outside of the Lunar Chronicles. It’s still a retelling, in the fact that it takes the story of Alice in Wonderland and tells the origin story of the Queen of Hearts. But it has none of those familiar friends, from the other books, so I wondered if I would enjoy this one just as much.

I did, mostly because I gave it the chance to be different. There was a serious case of insta-love, which could partially be forgiven because what fairy tale doesn’t have insta-love. There were moments where I worried that the plot would move too slowly and I would get bored, but the beautiful writing and the intriguing way Meyer interprets the world to make it vivid and familiar kept me captivated. But it’s the origin story of a villain. A woman who’s been wronged so much that she can’t help but snap. I wasn’t sure if Meyer could pull it off, because for so long in the story Cath is nearly likable.

But then it happens. You begin to see little hints of what she could be like, if she weren’t forced to be prim and proper and a lady. Threatening to wrap a flamingo’s neck around a tree. Steadily getting more violent and less likely to hold her tongue around people who would prefer not to hear such words from a woman of her status.

That’s another thing–social class means so much in Hearts, where Catherine lives. It practically dictates the plot of the novel and determines the outcome of her life for good or for bad. She can’t marry beneath her. She can’t refuse to marry someone above her. All the while, the citizens of Hearts seem mostly content to just ignore the problems of their world because it means they can continue to live in luxury. Which, honestly, is a cliche that appears in a lot of books nowadays, but I loved seeing how all of these little moments created because of this society banded together to create the Queen of Hearts.

It was terrifying. It was brutal. I may have cried a little. But I loved, and definitely recommend, Heartless. Though I won’t be giving away my heart anytime soon, and will hopefully be holding onto my head as well.