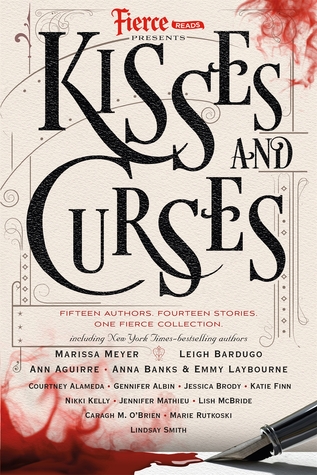 A fabulous collection of short stories from your favorite Fierce Reads authors, perfect for fans and new readers!

Beloved of readers and booksellers, our Fierce Reads program has garnered tons of enthusiastic fans since its inauguration in 2012. Now, the authors you know and love are coming together in one book! With standalone short stories from a handpicked set of FR authors, this fabulous collection will include a mix of original content and popular favorites, and will often feature characters or worlds from existing Fierce Reads books. Extended, personal introductions from each author will make this a must-buy for fans as well as a fantastic portal for engaging new readers with the program. With a wide range of genres and subject matter, there will be something here for everyone!

I LOVE short story collections! I grabbed up this one as soon as I spotted it in the store because it had Marissa Meyer, Leigh Bardugo, and Marie Rutkoski included. Three of my favorite authors! I immediately sat down to read this and hit an unfortunate snag. Although all of these short stories can, technically, be read on their own, all except one are inspired by these authors’ well-known series. This is less annoying when, as in the authors I mentioned above, I knew the context these stories were going into and could enjoy the extra insight into the characters or world these little bits provided. For other stories that I haven’t yet had the chance to get to the series . . . It was frustrating. These snippets would rarely have a conclusion and in one instance I couldn’t even read the story because I was warned it would spoil the book. Who knows if I’ve managed to spoil something else for myself already?

I wouldn’t say there was any one story in this I didn’t like. Overall, the writing was pretty solid (after I got over the whole blow about none of the stories being original). The one unique story was told in a twitter exchange between two authors, which was a surprisingly entertaining way to read the unconventional Sasquatch love story. If that isn’t enough to convince you to try this collection, I don’t know what else could.

I had to rate this collection lower than I wanted to (because I LOVE these authors and know that there are other favorites in here just waiting to be discovered when I actually read the series’ I just spoiled). The stories weren’t satisfying on my own. I feel like they would have been better suited in their own domain rather than this bind-up. Hopefully, I won’t get tricked into a collection like this again.